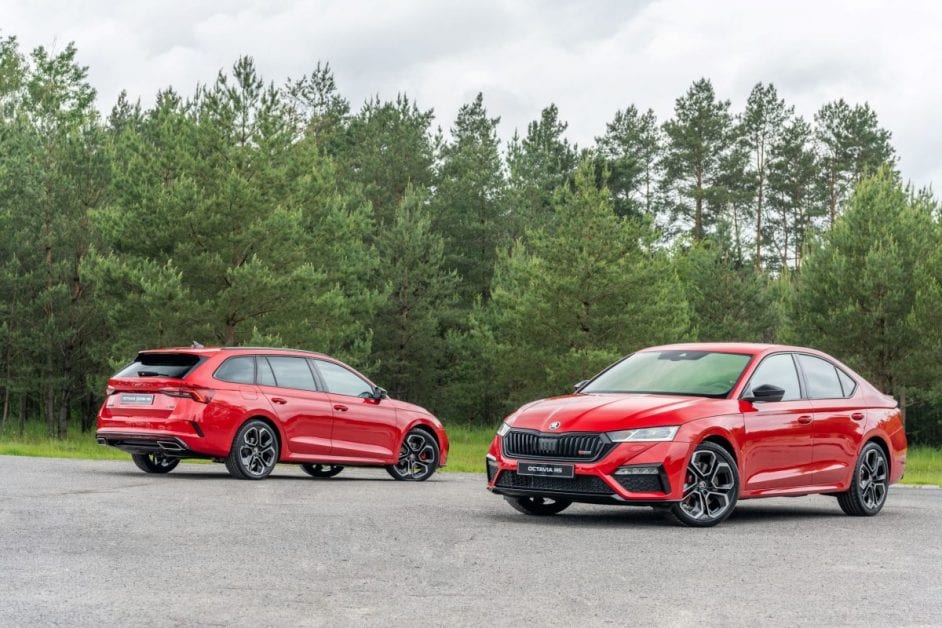 ŠKODA is continuing the tradition of its performance vRS models in the fourth-generation Octavia.

This model is the first from ŠKODA, offered in three different drive systems. In addition to the Octavia vRS versions with either a petrol or a diesel engine, the Octavia vRS iV – the brand’s first vRS plug-in hybrid – is now being launched.

All three variants feature sporty bodywork detailing including vRS-typical black touches. The interior, with its traditional and dynamic design, is also predominantly black.

Since the success story of ŠKODA’s vRS family began in the year 2000 with the first-generation Octavia, the sportiest versions of a variety of the Czech manufacturer’s production models have borne the distinctive abbreviation ‘RS’. The letters stand for ‘Rally Sport’ and are reminiscent of the ŠKODA 180 RS and 200 RS rally prototypes as well as the success of the ŠKODA 130 RS at the Monte Carlo rally in the 1970s.

The third-generation Octavia vRS, launched in 2013, was even more successful.

It was the first to boast the continuous red reflector strip at the rear, which has been a defining detail of vRS models ever since.

A total of more than 172,000 vehicles were produced. In Germany, the United Kingdom and Switzerland, vRS variants now account for more than 20 per cent of models in the range.

In the fourth generation of the Octavia vRS, customers can opt for one of three drive systems for the first time.

6-speed DSG as well as the Octavia vRS equipped with a 2.0 TSI petrol engine and a manual 6-speed gearbox or 7-speed DSG are each on a par.

The control electronics of the optional all‑wheel drive react to changing driving conditions within a fraction of a second and support the driving dynamics, for example when cornering fast.

Here, the system transfers part of the driving torque to the opposite wheel when the load on the inner wheel is reduced and maintains traction.

“No matter which drive concept you opt for as an Octavia vRS enthusiast, ŠKODA’s vRS models deliver exactly what you would expect: they combine the performance that has been cherished by customers for decades and supreme everyday practicality. All three drive systems are convincing with their consistent power delivery and excellent fuel consumption, and showcase the latest technology in impressive style.”

vRS models traditionally look much more dynamic than other Octavias. In addition to exclusive front and rear aprons, they feature numerous black attributes.

These include the ŠKODA-typical grille, diffuser, and Air Curtains above the exclusive LED fog lights.

The wing mirror housings and the window frames also come in gloss black, as do the estate’s roof rails.

At the rear of the hatch, the aeroflaps, diffuser and vRS rear spoiler are gloss black too.

Sporty top-of-the-range versions are characterised by exclusive vRS badges on the ŠKODA grille and tailgate.

The interior of all Octavia vRS models is predominantly black. The redesigned multifunction leather sports steering wheel has three spokes and bears the vRS logo.

It has rearranged buttons and new knurled wheels in a chrome design; vehicles with DSG feature shift paddles.

The front sports seats with integrated headrests are upholstered in black fabric, whilst the optional ergonomic seats come with a cover made of Alcantara®, leather and artificial leather as well as seat-depth adjustment and a massage function.

The seats bear the vRS logo and coloured decorative stitching in red or silver-grey, which can also be found on the leather steering wheel, the armrests and the Alcantara®-covered instrument panel.

Carbon-effect decorative strips and pedals in an aluminium design add the finishing touches to the car’s athletic appearance.

The three vRS models are fitted with the Virtual Cockpit instrument panel as standard, which offers an additional Sport layout.

They come with Driving Mode Select as standard, featuring a new vRS mode.

All driver assistance systems from the fourth-generation Octavia are of course also available for the vRS variants.

These include the new Collision Avoidance Assist, Turn Assist and Exit Warning as well as Local Traffic Warning.

In the three nippy range-topping models, dynamic driving characteristics are ensured by the progressive steering system (standard) and vRS-typical sports suspension, which is lowered by 15 mm for the 2.0 TSI and the 2.0 TDI.

Dynamic Chassis Control is available as an option and constantly adjusts the damping, thus enabling a particularly dynamic driving style in Sport mode.

In Driving Mode Select, DCC now enables parameters such as suspension, damping and steering characteristics or the operation of the DSG to be adjusted to suit individual preferences.

These adjustments are made using sliders via the central touchscreen. The ground clearance of the Octavia vRS iV remains unchanged when equipped with DCC.